The Golden Age of the Automobile in St. Louis – Molly Butterworth 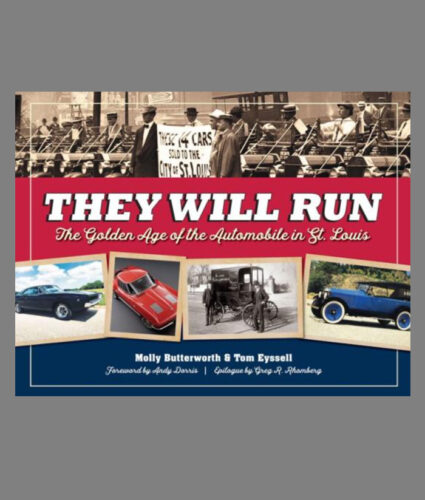 Were it not for a few quirks of history, St. Louis might have become the center of the American automotive industry, rather than Detroit. Since the late 1800s, St. Louis has been home to dozens of automobile makes and to numerous automobile manufacturers, large and small. In They Will Run: The Golden Age of the Automobile in St. Louis, head down the road of automotive history in The Gateway City, where transportation has always meant power.

Many St. Louisans have heard of the famous Moon automobile of the early twentieth century, but what about the Dyke, the Dorris, and the Gardner? Learn about the city’s prominence as a key automobile manufacturing hub through the 1960s, and the role played by notorious St. Louis playboy and bon vivant Harry Turner in bring the automobile to St. Louis.

Do you know which vehicles produced here helped the Allies win World War II? Or which ones helped carry and sell beer, create the legend of America’s first true sports car, or were raced around ovals and across the country? Dig down under the roads to uncover the previous lives of streets that once served as Automobile Rows lined with beautiful buildings in which to buy or repair cars.

Authors and car enthusiasts Molly Butterworth and Tom Eyssell deftly take the wheel of this in-depth guide to the automotive heritage of St. Louis. Sit back and enjoy the ride, from the horseless carriage, through the halcyon 1920s, and up to the ever-changing automobile industry of today.